Reflections on my Jubilee Year 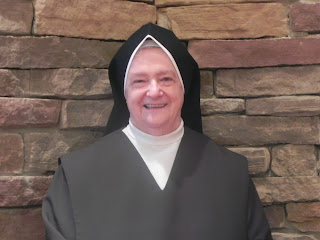 This year along with four other Sisters, I celebrated 50 years as a Carmelite Sister for the Aged and Infirm.

During my annual retreat in March, I spent some time reflecting on the past fifty years wondering where the time went!  I thought of that scared eighteen year old girl who left her family in Scotland to travel to New York to begin a new adventure.  How did she get there?

Growing up in Scotland I didn’t have much contact with religious communities and those I did meet always seemed so serious and mysterious.  Joining them was something that I never contemplated or ever thought I would do.  In 1966 there was a vocation fair that was held in my parish in Paisley.  The evening before it began I was at the Church and one of the priests there invited me to “come over to the hall and meet some Sisters.”  I went over with him and wandered around the hall watching the communities set up their information booths.  Some of the communities I recognized but most I didn’t.  As I walked past one booth, a Sister called out to me and invited me over.  I stopped and was introduced to the two Sisters at the booth.  It turned out that their community was from America and had just arrived in Scotland about two years before.  They were located in a different part of the country and not a part of our diocese.  (It appeared that they had badgered the Bishop to let them be a part of the vocation fair!)  I talked to them for a while and found myself exchanging addresses with them – not that I ever intended to follow up with them!

A couple of week after the vocation fair I received a letter from the Sisters inviting me to visit their convent.  This went on for a while until I finally decided to go for a visit and get it over with.  Getting there meant that I took a bus to the train station, a train to the ferry and a ferry ride to a town called Dunoon which is in Argyllshire.  To me it seemed like traveling to the end of Scotland!!  I remember ringing the doorbell and being admitted to a parlor to await one of the Sisters.  When I stepped into that house I felt this incredible feeling going right through me and a great feeling of peace within my being.  It was kind of freaky and I wondered what I was doing there!  The plan was for me to visit for the weekend but I wasn’t sure that I really wanted to stay that long.  When Sr. Elizabeth Anne came into the room I was ready to tell her that I could only stay overnight but she was so friendly and approachable and not at all serious like the other Sisters I had known that I said nothing.  At that point I did not even know what kind of work the Sisters did but by the end of the weekend all I could think was this:  “I don’t know what it is that they have but I want it too.”

After I got home I couldn’t get the experience of that weekend out of my mind and I found myself making another visit – then another until I was going to the convent about every other month.  During one of those trips I was privileged to Meet Mother Angeline Teresa, O.Carm., the Foundress of this congregation who was making a visit to the home.  At one point my mother said that it was financially difficult to continue to let me go off on my trips.  By then I was seriously thinking that I wanted to enter but wasn’t sure how to tell my mother.  After a few months my mother told me that it was a waste of my time to keep this up; after all she said, “It’s not like you are going to become one of them, are you?”  I saw this as my opening and told her that as a matter of fact I did want to enter that community.  Up until then no one in my family had met any of the Sisters or really knew where I was spending these weekends.  On my next trip I talked to Sr. Elizabeth Anne about the possibility of entering the convent and how to go about it.  Sister invited my mother to come for a visit so that we could all discuss the situation.

And so it was that in September of 1967 I left Scotland with two other young women to embark on the most incredible journey ever imaginable.  After arriving in New York we spent a couple of days in one of the homes there and then were taken to the Motherhouse to officially enter the community on September 8, 1967.

And what a journey it has been; have there been challenges?  Absolutely!!  Have I ever regretted taking that first step?  Never!!  Through the past fifty years my assignments have been varied and my Missions many, but through it all I have always known that I am where I was meant to be.  I still remember that sense of peace and belonging that I had when I first entered a little nursing home in Scotland named Bethania.  I truly believe that God gave me the gift of my vocation at that moment and I thank Him for always being with me through these fifty years.   Knowing what I do today would I still embark on that journey?  You bet I would!  Caring for our elders and making a difference in their lives is amazing, and I would encourage any young woman who feels that call from God, to step out in faith and with trust in Jesus answer YES to his invitation.